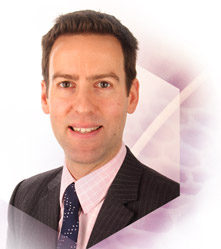 “Leaving university, I had no idea what I wanted to do.  Although I ideally wanted to use my science degree, the thought of spending several years specialising in a very small area of science to get a PhD that wouldn’t necessarily lead to a job didn’t really appeal to me.  I stumbled upon the European Patent Office at a careers fair, and it sounded like an interesting opportunity, so I applied.  However, they were looking for tri-lingual candidates, so I didn’t even get an interview.

I then found out that a friend’s father was a patent attorney.  He invited me to meet one of his firm’s trainees to find out more about the job, so I did.  It sounded fascinating, so I wrote letters to 25+ firms, asking for a job.  One of those letters turned into a couple of interviews and a job at one of the larger firms in London.

After qualifying, I was approached by a head hunter acting for Novartis, looking for an attorney to work in Switzerland.  As I’d spent a year in Vienna as part of my degree, I was interested in living on the continent again, so I applied and got the job.  While my initial plan was just to stay for a couple of years to see how it went, I ended up staying nearly 7 years, as the lifestyle in Switzerland was so good.  I moved back to the UK for family reasons two and a half years ago now, and am now based in rural Somerset.  While I’m still doing interesting work for a number of big name clients, I live and work outside of a major city, with a 20 minute bicycle commute, and all sorts of biking, climbing and other outdoor pursuits on my doorstep.”