This week, we are sharing C’s story, who is a technical assistant in a private practice. 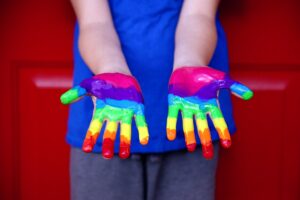 I entered the world of work expecting to have to fight.

While I was at university, the occasional horror story would go around of people in the LGBTQ+ Community who were out while at university, but that once they left and found a job, they found work to be a far less tolerant place, with some people effectively going back into the closet to avoid confrontation and harassment. I didn’t know the extent to which this pervaded any particular profession, but the legal sector hardly has the greatest external perception in terms of diversity. I resolved never to allow any of that to happen for myself. It couldn’t; I’d fought hard to accept myself and I wasn’t about to give that up.

The interviews and discussions I had with the partners, associates, and trainees at my future employer were very friendly and I generally felt at ease. I didn’t ask about LGBTQ+ networking groups or anything like that though; I didn’t know enough about how those kinds of things operated and I didn’t want to be confronted with the almost-callous question “Well what’s that got to do with your ability to work?”

But they didn’t seem like bad folks, and they offered me a job. So off to work I went, a little anxious that I might have to fight for my existence.

And I needn’t have been. I gradually outed myself to colleagues by talking about things going on in the world and would mention or at least allude to my sexuality when talking about LGBTQ+ issues. Few people even batted an eye at the revelation. At one point, I spoke to a colleague about the fears I’d had starting work. He was shocked that I’d had to worry about that at all and he hoped that he hadn’t acted in any way that made me feel like I wouldn’t be accepted. It was touching, and I almost felt silly for ever having worried at all.

“At one point, I spoke to a colleague about the fears I’d had starting work. He was shocked that I’d had to worry about that at all”

It wasn’t quite enough for me though. I wanted to find some kind of additional outlet that tied my work and personal lives closer together. My employer was one of the sponsors for the launch of Careers in Ideas back in 2018, which I volunteered to help with. Through that (and with a little company-sponsored Dutch courage), I met Andrea Brewster, who then pointed me to Darryn Smyth, one of the founders of IP Out, the LGBTQ+ networking group for people in the IP profession. One chat later and I found myself a member of the IP Out Committee!

It felt like things escalated incredibly quickly, but it really worked out well. IP Out gave me a space in which I could express myself fully and feel as though I was contributing something to the discussion of LGBTQ+ issues in the IP profession.

Now, over two and a half years in, I feel totally comfortable being who I am at work: I’ve gone to work with painted nails; I went a little extra with my suit at the Christmas party; and I’ve been writing articles for IP Out and IP Inclusive, for which I’ve received positive comments from people in my firm. Some of these things might feel small to other people, but I’m thankful that all of these things have been accepted and encouraged during my short time in this profession.