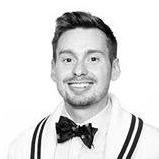 “My route to the profession was a little unorthodox.  I actually left school at 16 and found myself an office junior role with the global branding consultancy Interbrand, who happen to have an in-house trade mark department.  Within 18 months the formalities manager saw some potential in me and offered me a position as a formalities clerk.

Whilst at Interbrand I learnt a huge amount about the importance of brands and the value of intellectual property as intangible assets to any business. After leaving there I spent a further six years working at a number of IP specialist law firms as a paralegal with increasing responsibilities.  Then in 2006 my firm placed me on a 12 month secondment with The Coca-Cola Company as a paralegal supporting their European Trade Mark Counsel.  It was during this secondment that I truly discovered my passion for the trade mark profession and on completion of my secondment Coca-Cola offered me a permanent role supporting the management of their European trade mark portfolio.

As my role developed and my responsibilities increased, I decided to qualify as a Trade Mark Attorney, and so began the necessary training at Brunel University and then Queen Mary University of London.  In 2013 I was offered my current position as Brand Protection Manager for the Harley-Davidson Motor Company, and upon joining Harley-Davidson I completed the Professional Practice Skills Certificate at Nottingham Law School and qualified as a Chartered Trade Mark Attorney in 2014.

What I have enjoyed most about the profession, particularly from an in-house perspective, is my involvement from the very inception of a trade mark, whether that be for a brand name, product name or advertising tagline.  My role requires me to have an in-depth knowledge of the business and of our short- and long-term strategic objectives, to ensure our intellectual property enables rather than hinders the business in delivering its commercial priorities.

In addition to my professional activities, I am an active member of both IP Out and the Interlaw Diversity Forum, which promote LGBTQ+ equality in the IP and broader legal professions respectively. I have also written for the CITMA Review about my experiences as an openly gay Trade Mark Attorney.”